The Visionary Council members are the voices behind the concept of Outdoors Again, a focus group of individuals who know what they want and what they need in order to be able to engage nature in a fufilling and enjoyable way. 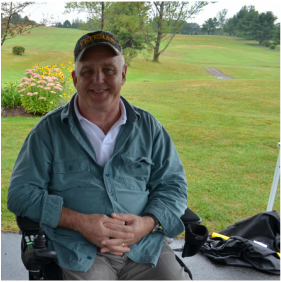 Rocky Austin
Rocky Austin was born in Skowhegan, Maine, in 1956 and had a very normal and fun childhood. Like many of his generation growing up in the Sixties, his days were full of cops and robbers, cowboys and Indians (don’t forget—the space race hadn’t started yet!) and baseball in a local cow pasture where a nearby farmer was kind enough to let them play. Rocky joined the U.S. Navy in 1973 and was a soon a “Fireman” in the U.S.S. Milwaukee, the J division, where they were responsible for all things liquid: fuel, water, Agent Orange, etc. One fateful night he was on Anchor watch (where 2 sailors would be responsible for dropping anchor in an emergency should the need arise) when he fell and injured his back, rupturing no less than 2 discs in his upper and lower spine. Rocky did not know at the time that this injury would eventually lead to his being in a wheelchair. Rocky left the service after his tour in 1976 and like many men he fought through the pain because there was work to do and bills to pay. Alas, his injury was becoming worse and worse, unbeknownst to him or his doctors. One day Rocky was disembarking a large piece of machinery he was operating when he fell flat-footed and was injured to the point of needing a cane or crutches. Eventually the pain wore on and his body could not recover, and Rocky has been in a wheelchair ever since. 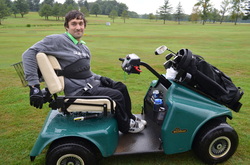 Zach Beaulieu
Zach grew up in Augusta, Maine with his mother, father, older sister and younger brother when he was struck by a car at the age of 4. Zach enjoyed many recreational activities outside of school, with his father coaching a basketball team that he played on. He continued in school, graduating from Cony High School in Augusta in 2004 before attending the University of
Illinois where he will receive his degree in Classics with a focus on Languages this year (2012) after taking time off to play semi-pro tennis. He enjoys socializing with people from all over the globe and is studying French, Polish, and Latin. Zach is planning to attain his Masters in Linguistics with a focus on French, hopefully studying in France to do so at some point. “The future is open for me, and I am very excited about the possibilities!”

“I became completely paralyzed at the T8 level of my spinal cord, when I was very young. At four years old, I was visiting my grandparents in Aroostook County, Maine, where, during the evening, I was called inside for dinner. I looked across the street to see my mother standing in the doorway. I ran to my bicycle, and I jumped on quickly, crossing the main road without much care for my surroundings. Suddenly, I noticed an oncoming car. I was struck, thrown into the air, and as I landed onto my back, my spinal cord was damaged severely. Since that moment, my life has been about the struggles that come with overcoming any obstacles in one's path. So far in my life, I have succeeded in becoming a role model for everyone, whom must learn
to adapt to a physical disability. My goal as an individual is to continue to be
a light for people in my community and around the world, hopefully, bringing inspiration, strength, and motivation to those around me.” 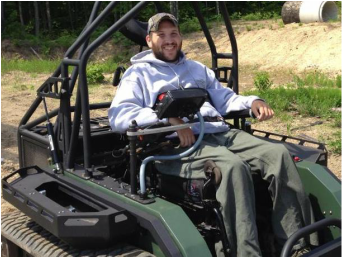 Tony grew up in Center Ossipee, New Hampshire with his mother and sister. His passions are
off-roading, snowmobiling, skiing, camping, fishing and all that good stuff. Tony loved working with his hands, whether it be working construction for his dad, landscaping, turning wrenches or logging. In December of 2006 when he was 22, he was in a logging accident where a tree struck him in the head breaking his neck & crushing the C5 & C6 vertebra paralyzing him from the chest down. He now works for Howe & Howe Technologies as our lead Ripchair Salesman and volunteering to help make the "Outdoors Again" dream come true.